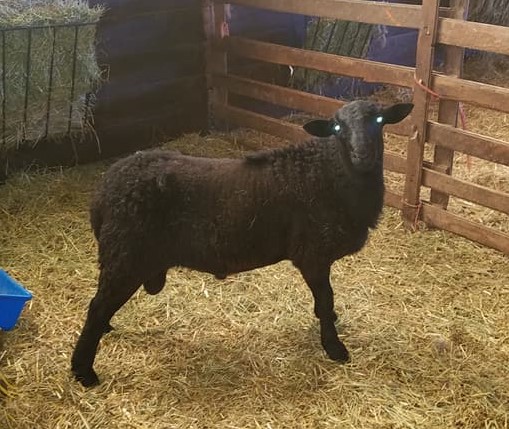 The development of the breed began in the late 1950’s with the importation of a small number of haired sheep from the Caribbean by Michael Piel of Maine. The Piel Farm had several thousand sheep at the time and Piel felt that “progress in selection for traits important to the production of meat would be greatly enhanced by the elimination of wool as a major factor for selection.” His goal was to combine the hair coat, prolificacy, and hardiness of the Virgin Island sheep with the meat conformation and rate of growth of wool breeds. He began to experiment with crosses between the hair sheep and various British breeds, especially Suffolk. After almost 20 years of crossing the resulting hybrids “in every conceivable combination” and selecting the individuals with the desired combination of traits, Piel eventually collected a flock of ewes he called KATAHDINS, named after Mt. Katahdin in Maine. During the mid 1970’s the Wiltshire Horn, a shedding breed from England, was incorporated into the flock to add size and improve carcass quality.

From this original flock, new breeders have been able to expand the number of Katahdin sheep in North America and many other countries, and select carefully for hair coat, carcass quality, and reproductive efficiency. In 1986, a breeders organization, Katahdin Hair Sheep International (KHSI) was formed. Its purposes are to:

* Register individual Katahdins and record performance
* Assist in promotion and marketing
* Encourage research and development related to the breed.

All Katahdins eligible for registration are inspected after one year of age to insure conformity with the standard of type. Breeders are required to be KHSI members to register sheep or request flock inspection. (Note: Lambs from 100% registered parents born after 1/1/98 no longer require inspection)

There are provisions for producers to follow an upgrading program to develop a purebred Katahdin flock by recording each cross with KHSI.

Katahdin sheep display many desirable economic traits. In order to scientifically document and test these traits, Katahdin breeders have been involved in several experimental trials.

Studies of internal parasite tolerance in Arkansas indicate that Katahdin sheep possess a significantly higher degree of parasite resistance than wool sheep that they were compared to. Heat tolerance trials demonstrated a similar relationship. Other traits being studied at research institutions include out-of-season breeding, prolificacy and fertility factors, carcass quality and meat flavor, and growth performance.

Select a Category to see all similar posts